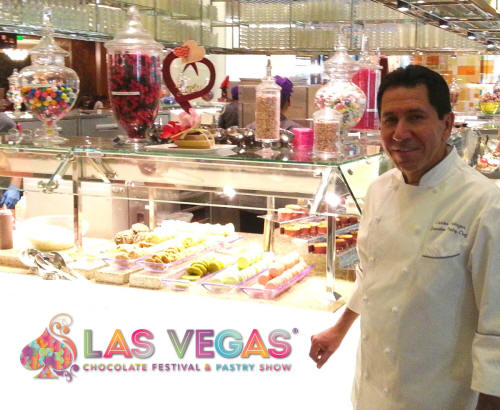 Some people are called to a profession, others are born to it. For Carlos Salazar, Executive Pastry Chef of Caesars Palace, it's a little of both. Chef Carlos' earliest memories center around his parents' bakery in his home country of Colombia. But when he advanced to head baker by the tender age of 17, it must have been clear already that he was destined for greater things. Within a year, he moved to the US to take classes and improve his pastry skills, and since then he hasn't looked back.

Today he oversees 60 employees at Caesars, making pastry and confections for VIPs, weddings and events as well as desserts for restaurants including Nobu and Gordon Ramsay, and breads for the esteemed Guy Savoy restaurant among others. His team produces 120 different desserts just for Caesars' acclaimed Bacchanal buffet, and Salazar estimates conservatively that they use at least 2 tons of chocolate a year. 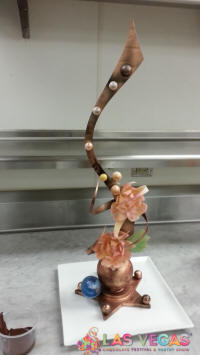 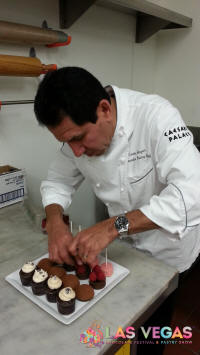 "Last Friday, we did a banquet for 3000, this week, 2500," he says, almost matter-of-fact. But quantity isn't everything. Each outlet gets special attention, just as every wedding cake is a custom order. "People want to feel we are doing something special for them," and Salazar is there to make sure the product follows through on that. In fact, if an order of bread or macarons or truffles isn't up to his standards, they will simply start from scratch. "We'd rather do it again than feel we didn't do our best."

Salazar has been at the helm of Caesars for the past three years: previously, he held a similar position for ten years across the Strip at MGM Grand. Previous positions included prestigious resorts like Bellagio The Breakers in Palm Beach, and San Francisco's landmark Fairmount.

Competing with 10 siblings (all are in the food business) must have given Carlos a taste for a healthy fight, too: his CV includes numerous finalist placements in national and international pastry competitions, including the 2007 Coupe du Monde de la Patisserie in Lyon, France, where he lead the US team to two wins.

"You don't know how good you are unless you compete," he says. And while he takes a lot of pride in the artistry of creating centerpieces, it's clear that his work isn't just about personal ambition. "It's my goal for all my employees to have that passion," says Carlos.