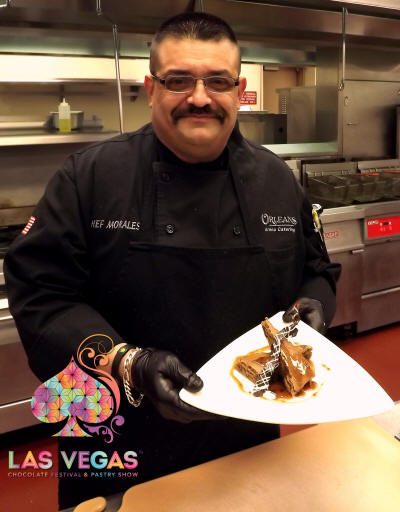 You can search all over Las Vegas looking for edgy, decadent desserts. But the last place you might think to look is the house where Wranglers Hockey and the World Hip Hop Dance Championships live: the Orleans Arena.

Drop in on the Arena's Executive Chef GIlbert Morales, though, and you'll get a pleasant surprise: Jack Daniels-infused chocolate dipped strawberries; chocolate cornbread with Crown Royal-scented bacon caramel sauce and chocolate covered jalapeno bacon; and what Gil likes to call his "Adult" cinnamon roll, injected with (you guessed it) Jack Daniels and covered in more of that CR bacon caramel sauce and crumbled bacon, for a double-whiskey delight. Just another morning's work, playing with some new ideas.

"I cook to taste, " says Morales , an avowed Tennessee whiskey lover. " If I think it tastes good, and I'd serve it to my Mom, then I'll make it."

Clearly, this Arena's food service is about more than hot dogs and nachos: on menus here, you can find chicken pot pies, Cubano sandwiches, teriyaki bowls with brown rice. They even make their own kettle potato chips in house.

"If you love what you do, " Gil says, "it comes out in the food." Morales, a Los Angeles native who worked his way up through kitchens, has loved what he does through several amazing positions, including long stretches with the Cheesecake Factory, NASCAR and even a stint cooking Kosher food. "It kept me on my toes, " says Morales, and when observant Jews praised the Latino's cholent or matzoh balls, it felt like a victory twice over. But Morales says he's learned from every situation. "Cheesecake Factory taught me a lot about putting love into the food without compromising." 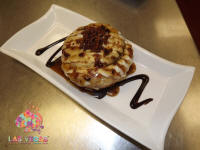 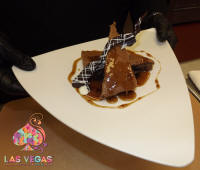 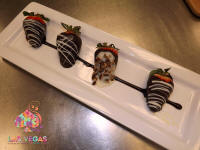 For Morales, the Las Vegas Chocolate Festival is one event he always looks forward to. Like every year, he says, "We're gonna have fun, and we're gonna represent."